Rotschildia aurota is one of the biggest silkmoths you can encounter in South America, and one of the many species of moths from the genus Rothschildia. It can be considered an Amazonian species; most records of them are in the eastern Andes and covering the Amazon basin.  The largest of them have wingspans of around 150mm-170mm, although most specimens you encounter will be smaller. The males are smaller than the females too. Specimens produced in captivity by captive breeding them tend to be smaller than their wild counterparts. They can be found in large parts of South America – they have been reported in Peru, Venezuela, Ecuador, Colombia, Bolivia, Guyane, French Guyane, Brazil, Paraguay, Uruguay, Argentinia and possibly more places. The caterpillars are polyphagous and feed on plants from several families including Euphorbiaceae, Rutaceae, Rubiaceae, Anonnaceae, Rosaceae, Fagaceae, Salicaceae, Sapindaceae and many more. The moths seem to fly at higher elevations, although this seems to vary a lot depending on their country of origin; they are generally encountered between 1000m and 3000m.

It can be difficult to identify Rothschildia aurota by appearance as there are quite a few similar looking species. The biggest pointer should be the geographical location and elevation, plus the genitalia. The moths are variable looking; it doesn’t help that they have been split up into many subspecies. Data suggests that they have up to three generations a year, although their local flight times seem to vary per geographical location. Rothschildia moths are often raised in captivity by entomologists and hobbyists, both inside and outside of their native range. Rothschildia aurota is no different, and even in Europe and America there are hobbyists that breed them. This is mainly because they are easy to breed and have impressive wingspans. 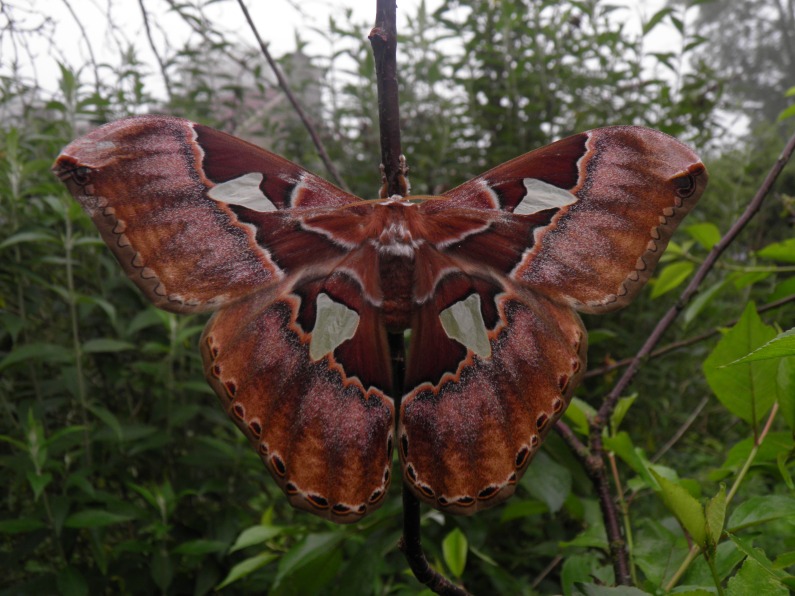 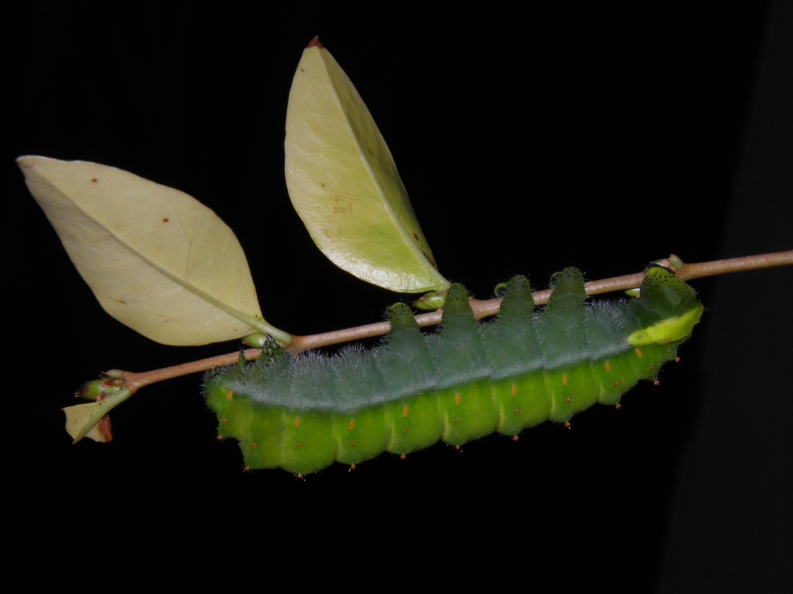 The newly hatched caterpillars have black and yellow bodies with black stripes in the first two instars. In these phases, they are social and feed and shed their skins together in groups. If you want to raise these in captivity, it’s best to keep them together in medium to large groups during this phase, as the social behaviours stimulate their feeding. They are best raised in closed plastic boxes or cricket tubs.  The caterpillars are polyphagous and feed on plants from several families including Euphorbiaceae, Rutaceae, Rubiaceae, Anonnaceae, Rosaceae, Fagaceae, Salicaceae, Sapindaceae and many more. 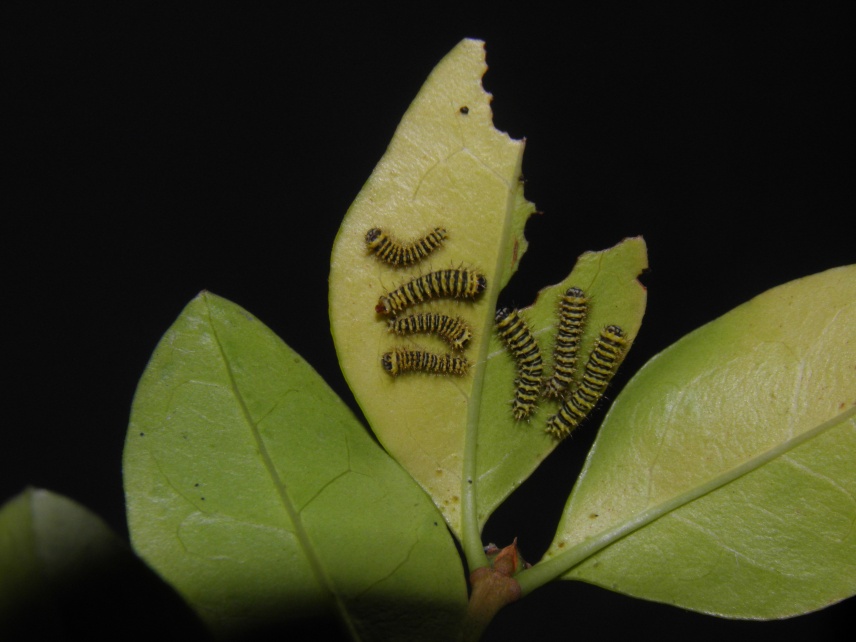 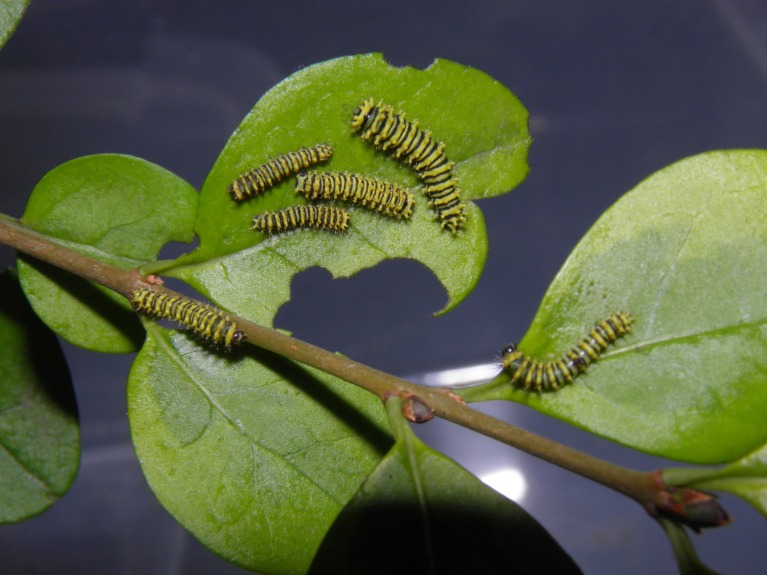 From the third instar and beyond, the caterpillars become green. The larger caterpillars may have slightly urticating setae, and may cause burning sensations after being handled. Although this is by no means painful, it can be  considered annoying or irritating, and a potential risk to people with allergies – something to be aware of when handling the larvae. The sting is however hardly felt if they handled gently. 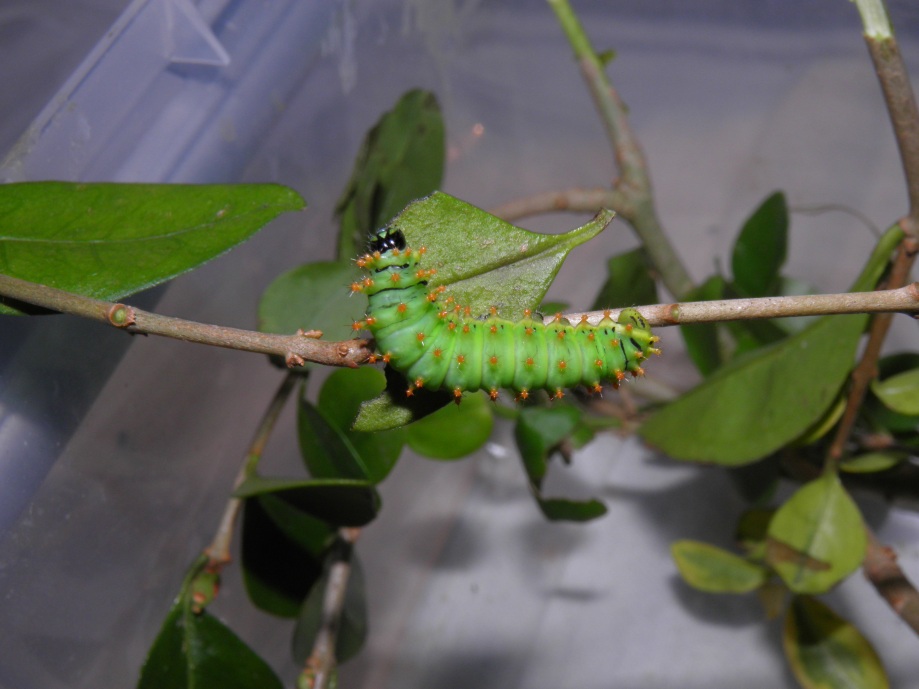 The fifth and fourth instar look quite similar. They are bright and usually lime green with orange tubercules.  Their undersides are darker green and are hairy; this is most likely a form of countershading, a form of camouflage that helps the larvae blend in with the environment. They have a great appetite and can defoliate plants quickly.  They are tolerant of a higher degree of humidity. Older and fully grown larvae are best raised with a bit of airflow and appreciate some ‘fresh air’, as closed plastic boxes and containers may still contain an increased risk of infection and pathogens despite the fact they can cope better with being reared  in them than most other Saturniidae. Cages, sleeves or boxes with the lid removed are suitable for them. 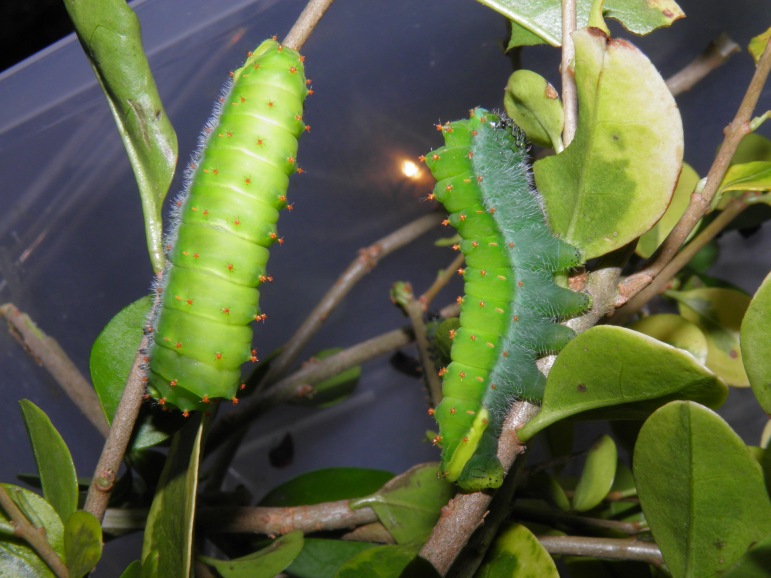 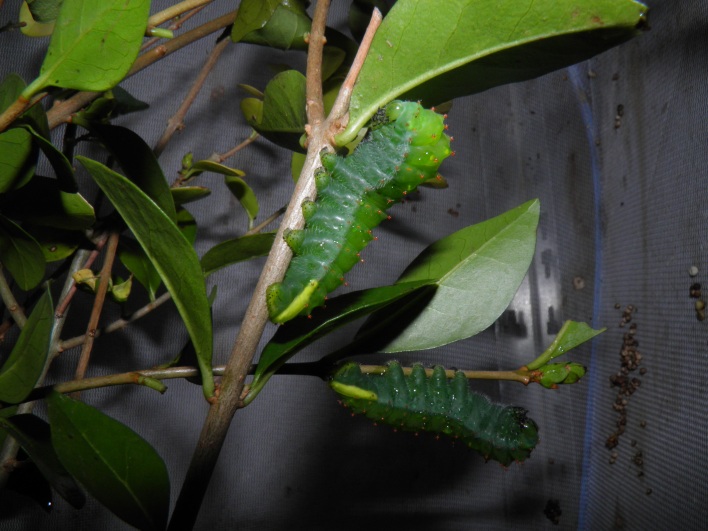 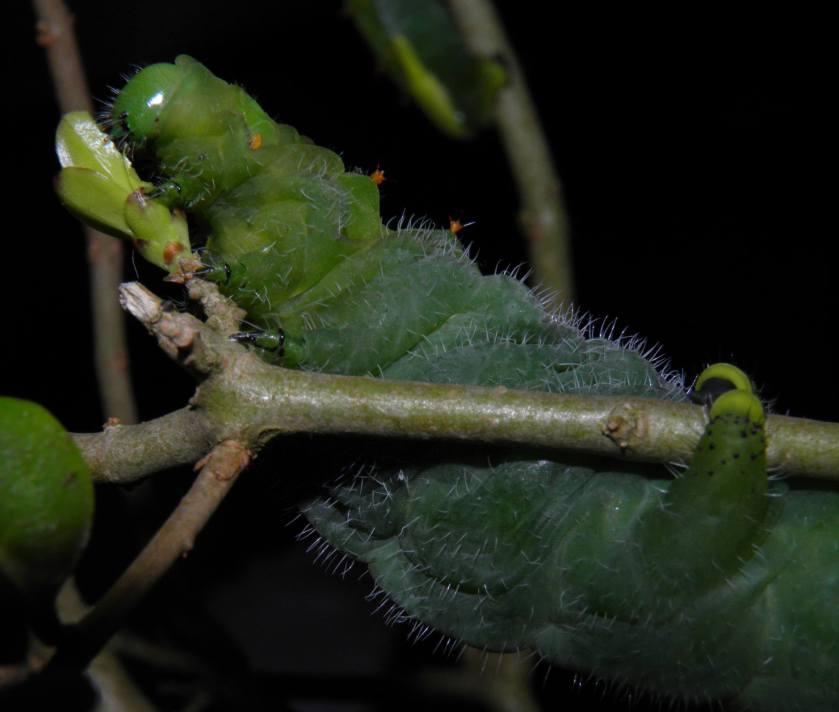 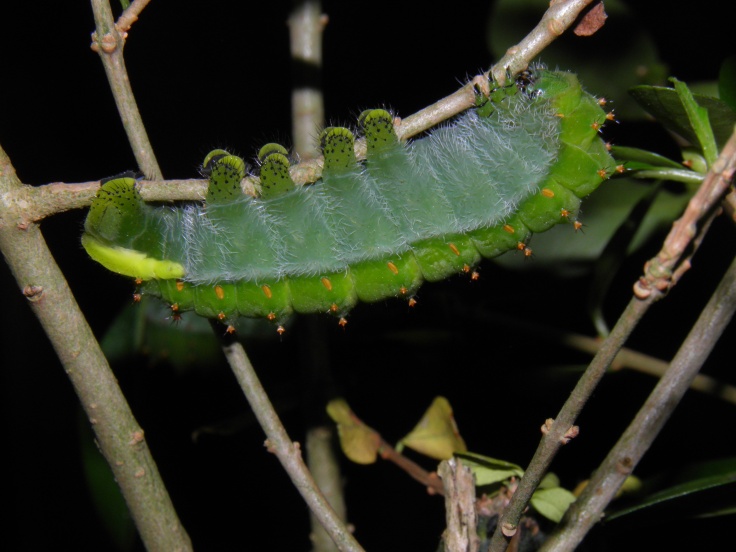 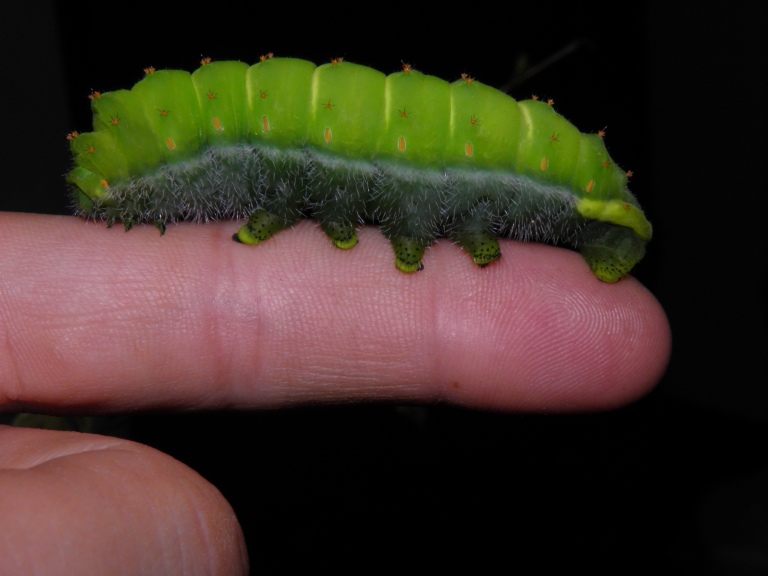 Once they are finished,  the quite large fully grown caterpillars spin papery silver cocoons, that later turn brown and become a lot thougher. Data suggests that they have up to three generations a year, although their local flight times seem to vary per geographical location. Diapause is possibly induced by factors such as daylength, temperatures and light intensity. This means they may or may not decide to pupate depending on the conditions they have been raised in, mainly the local climate.   Depending on the geographical location they seem to have one to several generations a year; it mainly depends on if the local climate allows it or not. In most tropical regions, they are most likely nearly continuously brooded, producing two to three generations in one year. However in ‘colder’ localities they may just have one single generation per year during, diapausing during the less favourable seasons.  In the tropics, colder localities mostly mean higher altitudes and mountainous habitats, and less favourable seasons the cooler dry seasons. 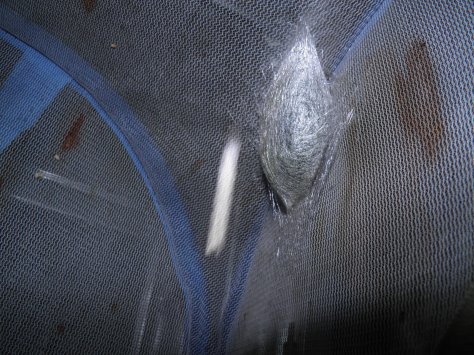 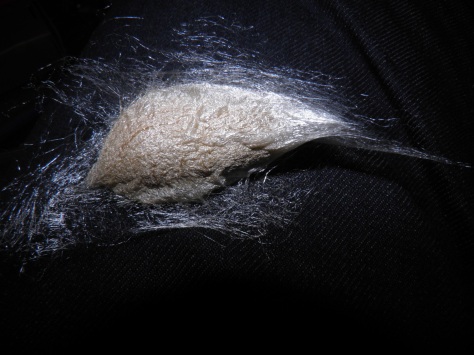 The adults of Rothschildia aurota will hatch from their respective cocoons in 1.5+ month time, although it can take much longer in captivity – up to a year or more, if the conditions are unfavourable to them and the pupae are in a diapausal state. The combination of warmth and humidity should encourage them to hatch. Adults are relatively short lived because of their inability to feed, although these large moths can last 7 to 20+ days as adults from the fat reserves stored inside their abdomens that provide them energy during their short lifespans.  The largest of them have wingspans of around 150mm-170mm, although most specimens you encounter will be smaller. The males are smaller than the females, and the males have broader, bigger feathered antennae than the females that have thinner antennae. Males are smaller, more slender and have an abdomen that ends in two ‘hooks’ (claspers) while females have round, fatter and heavy abdomens that end in an ovipositor/scent gland.   Males have a much more active lifestyle and need to fly for miles in some cases to find a partner. For that reason their bodies are often better adapted for flight. Females of Rothschildia aurota are less eager to fly. They appear quite apathic  and inactive and may sit in the same spot for days, waiting for a male to arrive. The females can emit pheromone, a chemical that attracts males. The job of the female is mainly to remain undiscovered and in a secure position, until a male finds her. Because females carry hundreds of eggs and are greater in size, flying is harder for them due to their increased bodymass. However, after fertilisation she becomes more active and starts to fly more frequently, and will lay small groups of eggs on the surfaces she encounters. 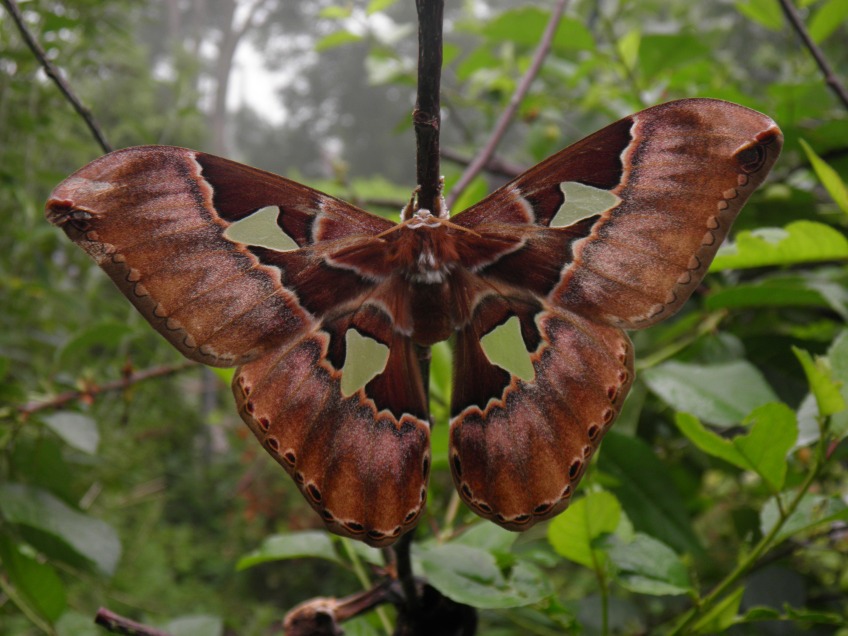 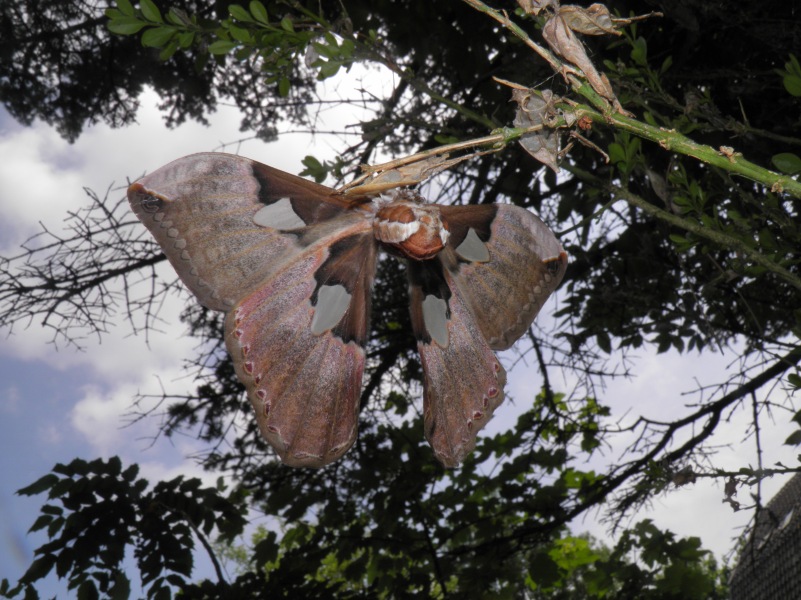 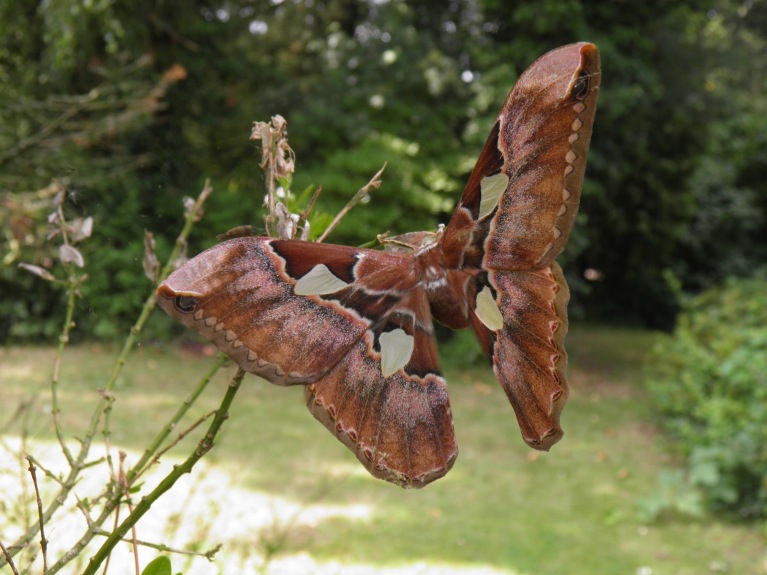