Smerinthus ocellata, the eyed hawkmoth, is a species closely associated with river beds, swamps, wet meadows and grasslands and also suburbs and parks. Their name is derived from the eyespots (ocelli) on their hindwings that they use to scare away potential predators. The caterpillars mainly feed on Salicaceae such as willows (Salix), but also poplar (Populus), on Rosaceae such as mainly certain types of cherry (Prunus) and apple (Malus),  and less commonly types of Betulaceae such as alder (Alnus) and birch (Betula). Although it can be encountered on a wider range of food plants, their favorite type of food plants is really willow (Salix), and larvae are most frequently encountered on sallow – ‘Sallow’ is the common name used for “Old World” (European) broad-leafed species of willow – and on weeping willow (Salix babylonica). The moths show a certain degree of individual variation regards to wing patterning, shape and base colour.

It is found in nearly all of Europe, European Russia, the Caucasus region, Central Asia and northwest China. Depending on the geographical location and local climate, it has one to three generations a year. Northern populations have only one generation, whereas Southern populations have two or three. This is likely due to natural key factors such as daylength and temperature regulating the induction of diapause in pupae (overwintering), and not genetic. When resting, the moths are quite well camouflaged against tree bark, leaf litter or wood, but if disturbed they will lift their forewings and reveal their hindwings and assume a threat pose; this is supplemented by a ‘dance’, where the moth wiggles its body and hindwings to put emphasis on the eyespots. They are active at night, and are one of the Smerinthinae species that lack a proboscis – their mouth parts are reduced and not functional. Because of their inability to intake food, adults only live for about 5 to 14 days; being unable to replenish their energy. The adults live off a fat reserve in their abdomen, that sustains them for long enough to locate a partner and pair before dying.

Females  are less active than the males. Females of Smerinthus ocellata species don’t like to fly excessively. They appear quite apathic  and inactive and may sit in the same spot for days, waiting for a male to arrive. The females can emit pheromone, a chemical that attracts males. The job of the female is mainly to remain undiscovered and in a secure position, until a male finds her. Because females carry hundreds of eggs and are greater in size, flying is harder for them due to their increased bodymass. At night, males are very active and actively patrol the area to detect females. However, after pairing, females become more active and start to lay eggs – these eggs hatch in 5 to 14 days time depending on the temperature.

Adults of Smerinthus ocellata are very easy to pair in captivity. Males are very eager to find a partner, and will pair with nearly everything that moves; in captivity they have been observed to pair with nearly anything, even females of Saturniidae species! It is important to note that this behaviour has not been recorded in the wild however, but it is a demonstrative example of how willing the males are. They need to be provided a well-ventilated cage made out of netting or gauze. Chilly or colder nights do not discourage them; they are one of the first species of hawkmoths that are recorded in early spring, with the first adults becoming active in April. 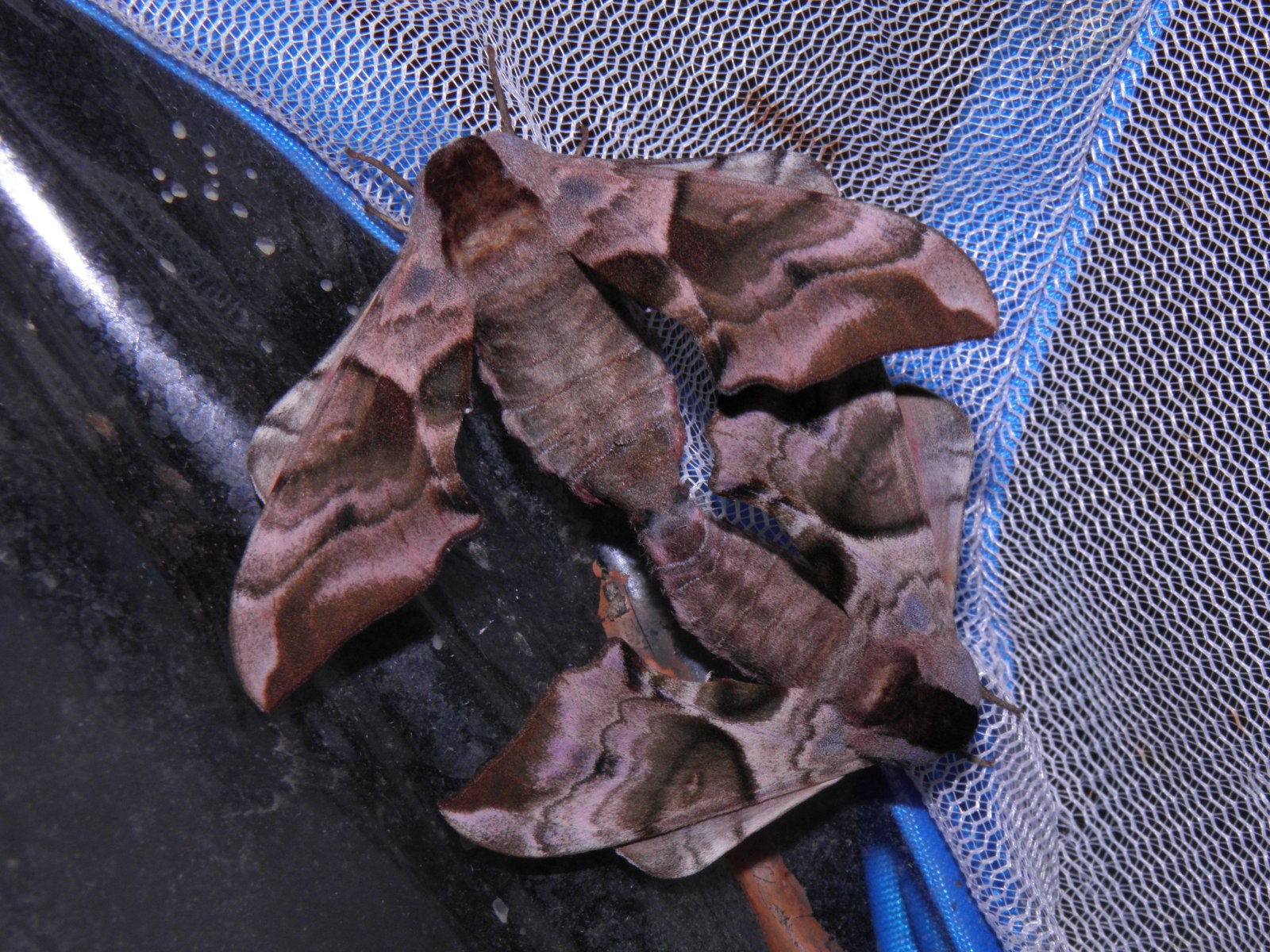 A pairing of Smerinthus ocellata in a cage in captivity

After pairing, the female will produce a lot of pale, transparent yellow/greenish oval shaped eggs and stick them to rough surfaces. Depending on the size and vitality of the female, they lay around 50 to 200 eggs. These will hatch in roughly 5 to 14 days, temperature affects their development  – warmer temperatures speed them up.

Important is to keep them well ventilated: this is the main mistake people who wish to raise this species make. Smerinthus ocellata is very tolerant of mistakes – even if neglected in captivity they will cope well and survive, feeding on suboptimal or old food plants, or in too high densities  and hot or cold temperatures out of their comfort zone that other species will not survive. But the only unforgivable mistake is to raise them in airtight plastic boxes: this will kill the entire brood. They need a lot of ventilation and fresh air to survive, as they are very subsceptible to the pathogens that will form in humid, closed enviroments – these include bacterial growth, fungal infections and viruses that become active. I personally raise them in small netted cages that I completely stuff with fresh food plant daily. 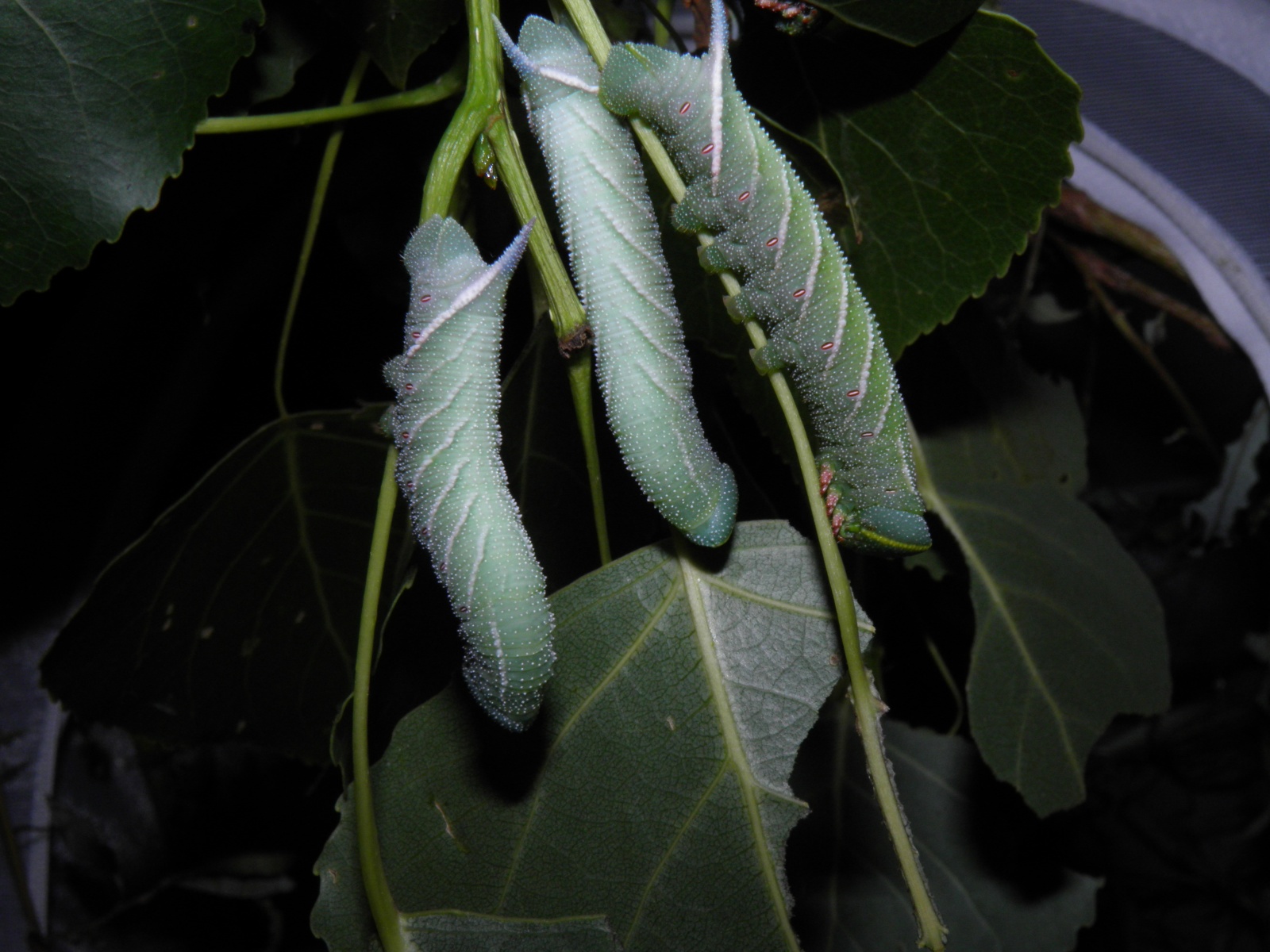 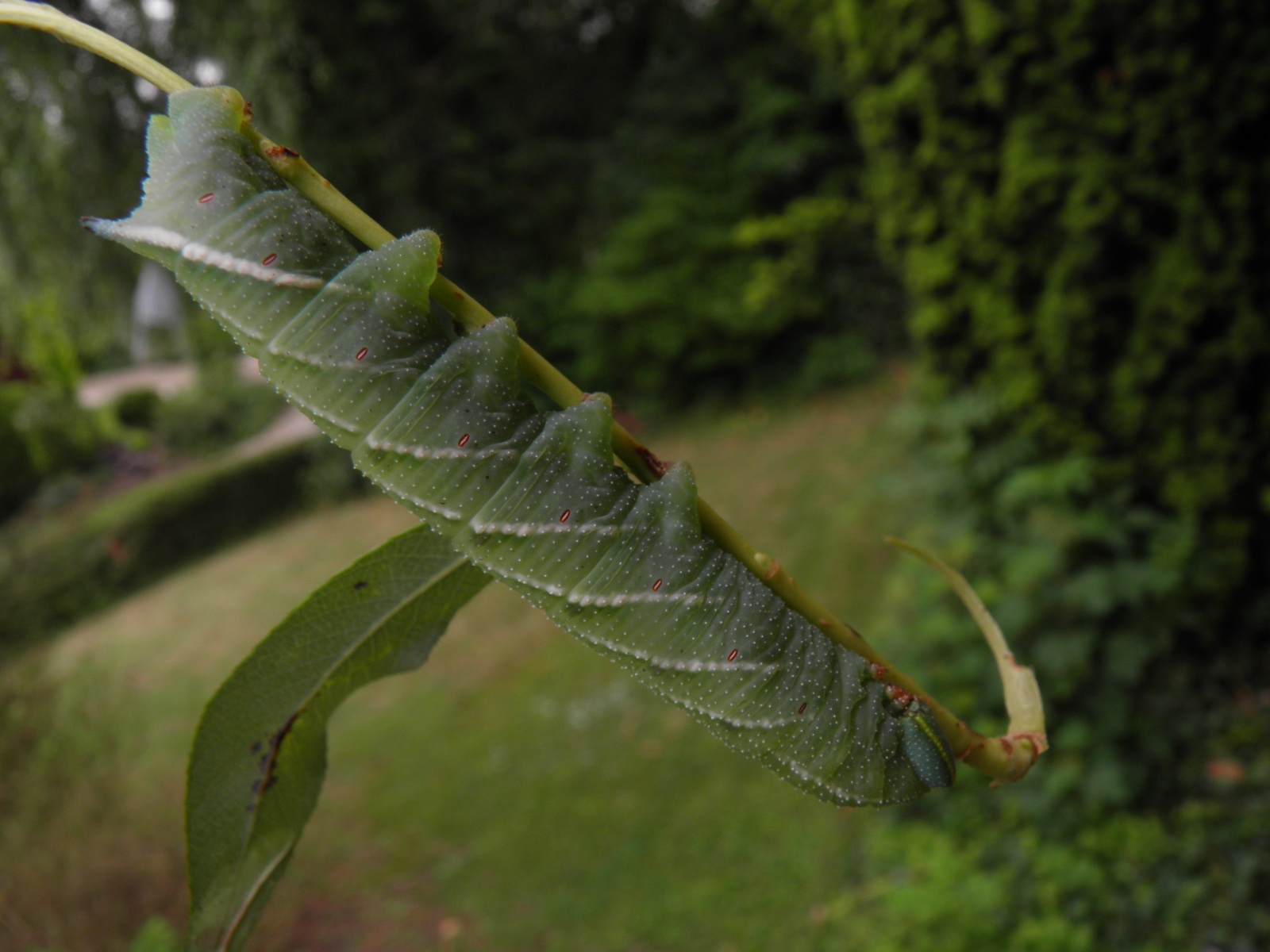 Smerinthus ocellata on Salix, in a densely packed net container with Salix babylonica

Larvae become 6cm to 8cm in length if fully fed and mature, although captively reared individuals tend to remain smaller than wild animals. The caterpillars of Smerinthus ocellata pupate underground, and will burrow in the soil to form a subterranean chamber. Here, the pupa can remain for a long time – up to almost a year when the pupae overwinter in the regions where they only produce one generation, and survive the harshest cold in winter. Prepupal larvae change their colour and become rather darker green instead of their usual somewhat cyan/blueish/greenish tint. Their prolegs retract and are unable to stick to any surfaces, and the larvae descend into the earth and burrow. In captivity, the soil or sand can be substituted with other materials such as vermiculite, bird sand, loose garden soil, or if you are lazy: paper towel or kitchen roll. When emerging, adults burrow their way up to the surface and then find a safe place to hang – most commonly tree trunks, shrubs, or in suburbs: walls of houses and fences. Larvae do not immediately turn into pupae, but will lay for a few days up to a week before they shed their skins and pupate, evaporating much of their excess moisture. 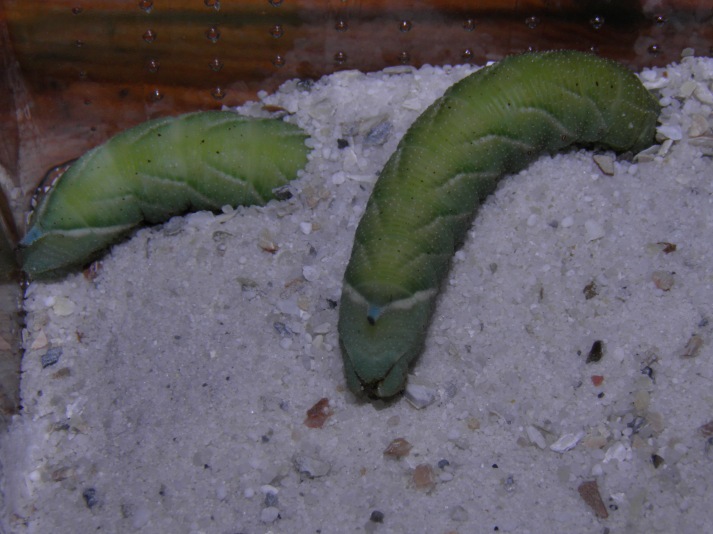 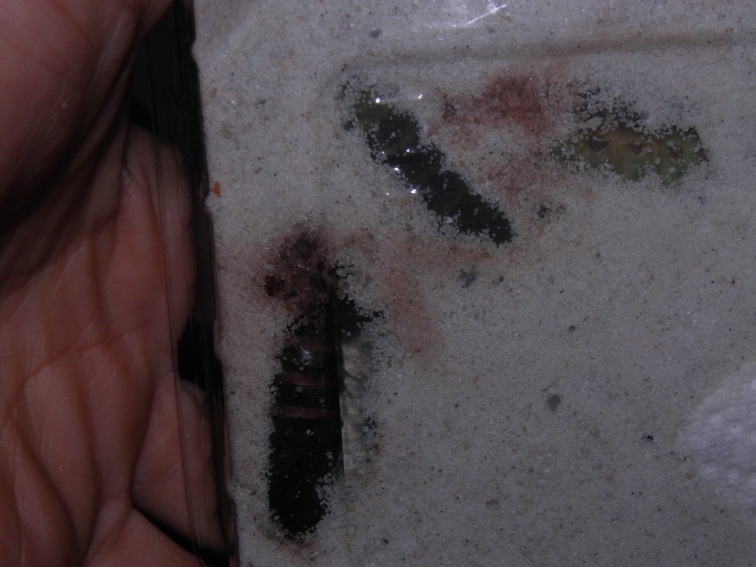 Burrowed larvae in the bottom of the container that have pupated 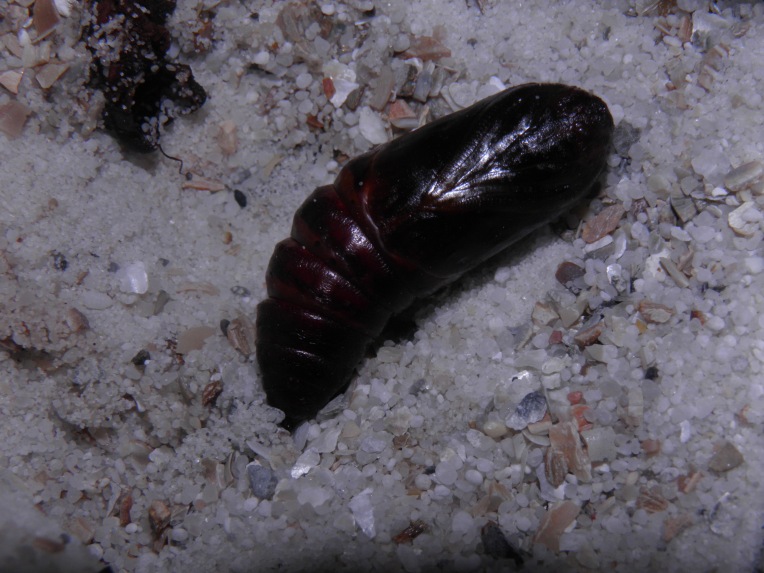 If kept warm and a little bit humid (but not wet), adults can hatch relatively fast – in less than a month, you can expect to see adults if they have decided to produce another generation. When resting, the moths are quite well camouflaged against tree bark, leaf litter or wood, but if disturbed they will lift their forewings and reveal their hindwings and assume a threat pose; this is supplemented by a ‘dance’, where the moth wiggles its body and hindwings to put emphasis on the eyespots. Males are smaller than females, and tend to curve their abdomens upwards in the resting position, while females are bigger, have a fatter and straight abdomen, and less pronounced/feathered antennae. 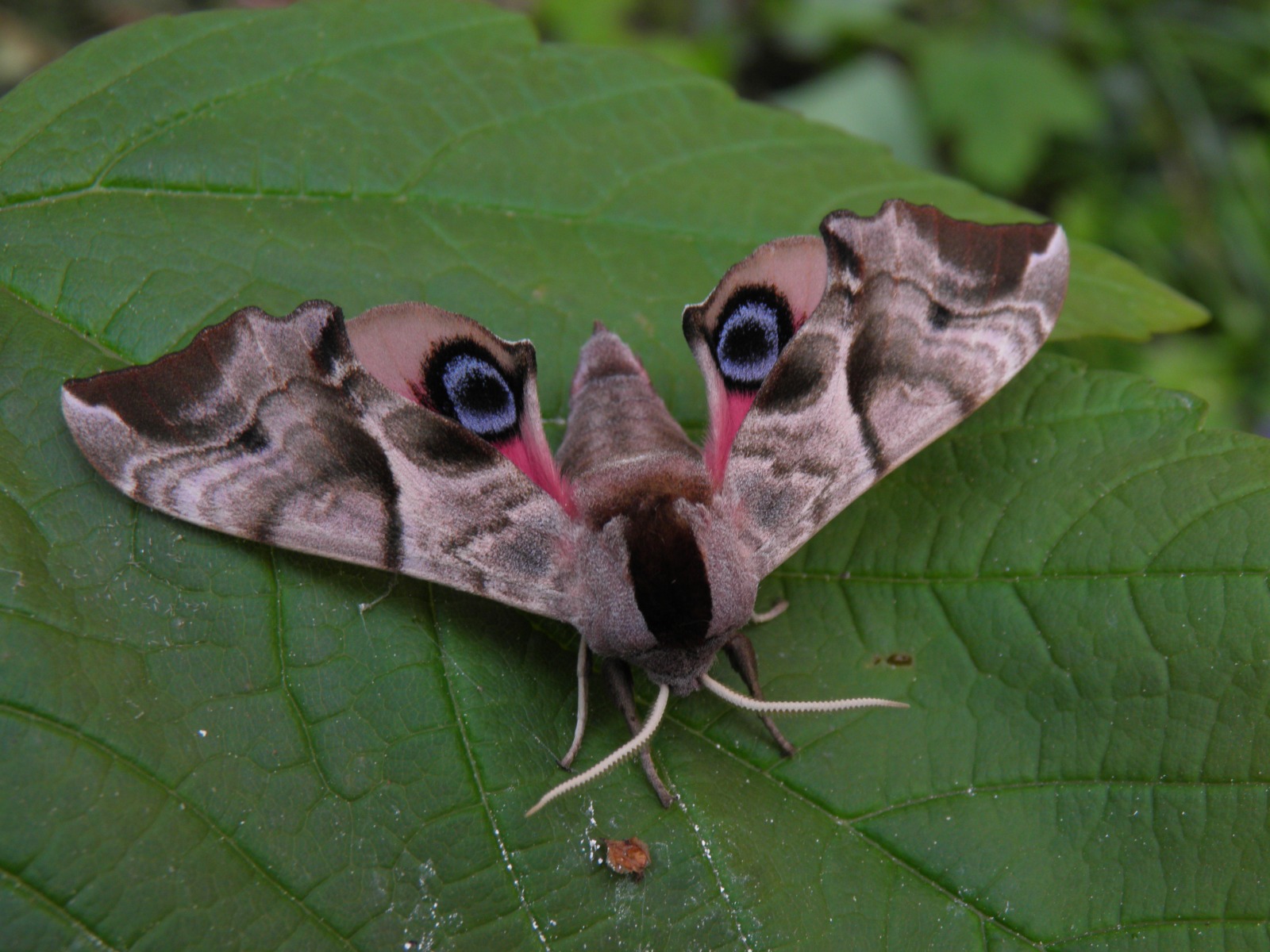