Lymantria monacha, the “nun moth” or also “black arches” moth, is a common Eurasian species of tussock moth that can be very prevalent in forests. It has a wide distribution and can be found in most countries in Europe but also in Russia, and Asia (China, Japan). It is a true woodland species that is often found in forests; in particular those with sandy soils such as forest vegetation associated with dunes, sand drifts, coastal areas and softwood forests, but in some cases also dedicuous forest. Why it is associated with these habitats in particular, becomes clear if the host plants are examined: while it is a very polyphagous species willing to feed on many types of trees, it has a strong taste for coniferous trees of all kinds. Several kinds of conifers such as Pine (Pinus), larch (Larix), spruce (Picea, Abies) and  fir (Pseudotsuga) are among the most commonly eaten food plants. Next to coniferous trees, they are also very fond of birch (Betula) and oak (Quercus). Lymantria monacha is very polyphagous and can eat even more types of plants: but conifers, oak, and birch are really their favorites, and their major host plants in the majority of cases and their distribution is mainly linked to the availability of suitable conifer, oak and birch forest. Despite that, in some cases caterpillars have also been observed to eat ash (Fraxinus), beech (Fagus), hornbeam (Carpinus), blueberry (Vaccinium sp.), maple (Acer), poplar (Populus), linden (Tilia), elm (Ulmus) and hazelnut (Corylus).

On the bottom: the smaller, triangular male and on top: the bigger female

The populations of Lymantria monacha exihibit a lot of fluctuations. Some years, the moths are rarely seen and exceedingly scarce. In other years, the moths are extremely common. In the “peak” years when the moth is very common, the amount of individuals can grow to pest-like proportions; during these outbreaks, the caterpillars can completely defoliate conifer, oak or birch forests. These plants are of little agricultural value, so most of the damage is considered to be ecological; Lymantria monacha plays a role in forest management and conservation, although it is not much of an economical or agricultural pest. In large numbers the moths are capable of defoliating trees so intensely, that they could die, destroying parts of coniferous forests.

The eggs of Lymantria monacha are small and black, and easily overwintered in plastic tubes. In the image below, the eggs of the non moth can be seen in the PCR tube. They can survive freezing temperatures but are best overwintered in natural conditions, around 0C-10C. In the wild, females deposit the eggs deep inside the cracks of tree bark; they take a half a year to hatch, since the eggs need to overwinter before they can hatch. They only hatch early spring.  In captivity this can be done outside in a garden, provided the winters resemble those in it’s native range. 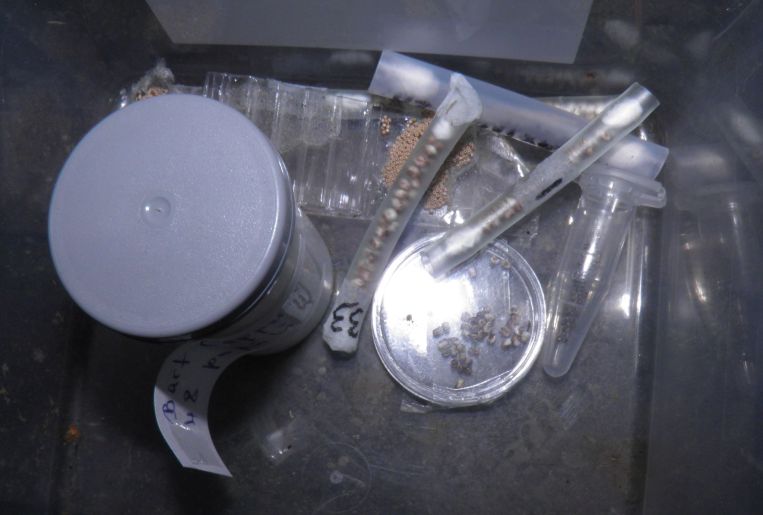 Only if the eggs are kept cold for several moths, they will respond to an increase in temperatures and begin to develop.

Raising Lymantria monacha is quite easy. In captivity, they are very resilient, and will usually survive if provided basic care; that is fresh leaves, hygiëne, and a appropriate space and ventilation. The younger instars can be raised in plastic boxes effortlessly; although the larger, more fully grown larvae can be provided a cage made from mesh/netting, to provide optimal ventilation and airflow. They can be given a selection of oak (Quercus), birch (Betula), cherry (Prunus), coniferous trees (Pinus/Tsuga etc) and any of the host plants mentioned above.

Eventually, the caterpillars will become larger, and will do better in well ventilated rearing sleeves and/or cages. It is entirely possible to raise them from egg to pupa in plastic boxes though; but ventilation and space will increase their survival rates. A cut branch of host plant can be kept fresh in a water bottle or empty soda can that is filled with water. The larger larvae tend to hide stiffly pressed against the branches or cage walls as they would in the wild; in their natural environment, they prefer to camouflage themselves on tree bark. 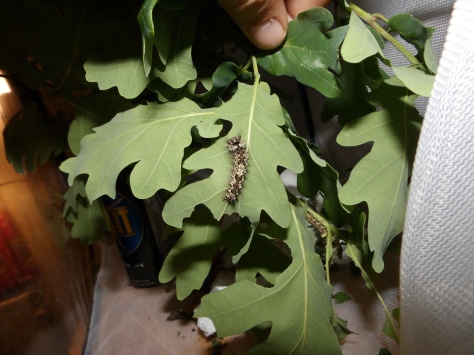 Once the larvae are fully grown, they will pupate. For a life stage as vulnernable and immobile as a pupa, it seems that they are not all that concerned about being well-hidden, and pupae are often found in plain sight and fully exposed. Lymantria monacha do not spin much of a cocoon at all. Instead, they choose to suspend themselves with silk, forming a naked pupa that is seemingly “glued” to the surface by fine silky threads. They seem to pupate in quite random spots; pupae can be found dangling from the trees, between the foliage and on tree bark, in leaf litter or cracks and crevices. On coniferous trees, larvae often pupate between pine needles spun tightly together with silk.

The pupae are quite hairy too; big female on top, small male below

It is perhaps because their pupal stage lasts rather shortly, that the larvae do not make the effort to spin an elaborate silken cocoon or burrow into the soil (as most other moths do) to be more well-hidden from predators and the elements. The pupal stage seems to last only a few weeks. (about 3 weeks on room temperature).

The adults of Lymantria monacha are short-lived, and cannot eat for they have no functioning mouthparts. They live for about a week. Interestingly, adult Lymantria monacha are both diurnal and nocturnal; that means that the adults can be active both at day and at night. They only mate, lay eggs, and die. Males are much smaller than the female, and have big plumed antennae. Females have short, thin antennae.  Interestingly, if this moth is disturbed, it will lift its wings and reveal a bright red abdomen with black stripes. This is warning colouration, that signals to predators that the moth is potentially toxic. Interestingly, as far as I know, Lymantria monacha are not chemically protected and should not be toxic to predators. In this case, it may be a form of bluffing; some predators may not want to take the risk of getting poisoned and avoid the potentially toxic insect.

Written by Bart Coppens, based on a real life breeding experience