Hyperchiria incisa is an incredibly beautiful moth from the silkmoth (Saturniidae) family. Among other places it is found in Brazil, Peru, Venezuela and more South American countries. The moths are among the smaller Saturniidae; they seem to be slightly smaller than Automeris io, but are incredibly detailed and beautiful. 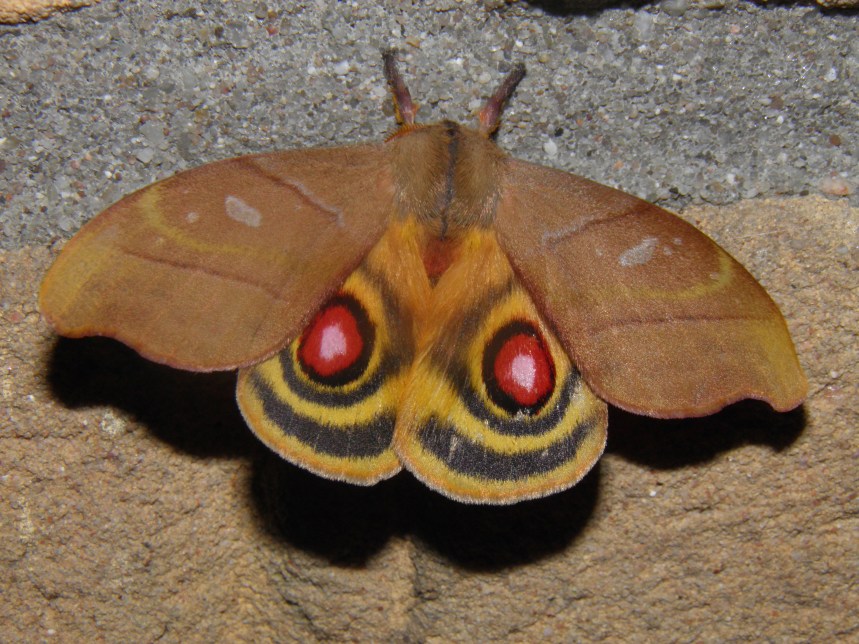 In the wild, these moths seem to prefer host plants from the Fabaceae family; it is probably a good idea to experiment with plants from this family.  In captivity they will however also thrive on oak (Quercus) and willow (Salix). Some breeders have also raised it on firethorn (Pyracantha) although mine refused to feed from this plant. The caterpillars are light green and covered with venomous spikes, as is usual with Saturniidae from the Hemileucinae subfamily.  Rearing this species seems to be quite easy, though the larvae do grow more slowly than most Saturniidae, so patience is needed.  They come from some of the most humid habitats, so raising them in plastic boxes is probably an option, although I myself preferred to rear them on food plant in a water bottle inside a rearing cage. 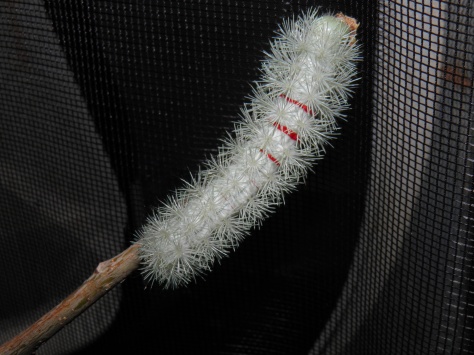 Next to their toxic spines, these caterpillars also have another unusual defense mechanism; the skin folds between their thoraric segments  is bright and blood red. When the caterpillars are typically resting or feeding this is not visible, but if disturbed or threatened, they will puff up or stretch their neck, to reveal the red stripes as a warning.

The young caterpillars are very social and live and feed in groups – however the later instars become a little more solitary and are often seen alone. It is a good idea to rear them in bigger groups, and seperate them as they become bigger and want more space.

The males seem to be much smaller than the females. They are also extremely active and have a short livespan – they don’t seem to last longer than 5 to 7 days. Females last a little longer (10+ days) and are also significantly bigger. The moths are actually well-camouflaged and resemble a leaf when they cover their hindwings with their forewings in their resting position. But when disturbed they will flick their wings open in a twitching motion, revealing two red eyespots, bright enough to startle any curious or hungry animal.

When they are finished growing, the caterpillars descend to the floor to pupate.  If provided the opportunity they will try to burrow a little, but they don’t seem to want to dig too deep; they are OK with hiding themselves in tiny sheltered spots and loosely spinning them together with minimal effort. In nature they probably hide in the leaf litter on the forest floor and spin some leaves together, but do not pupate deep underground. These moths are continuously brooded, though they do seem to be able to go into some sort of diapause to skip the more unfavorable seasons. If kept warm and humid they will however emerge in about a month, though if kept cooler  (but frost free!) they may possibly remain in their pupae for several months.

Pairings probably last for a short while; this is typical of Hemileucinae. Many breeders that bred them have still failed to observe any “live” pairings. All in all it seems to be a friendly species to breed, and not that difficult to care for.  The biggest challenge is getting the young caterpillars to feed. I have had eggs of this species several times in my life, but in some cases they will refuse to feed on the plants I have previously raised them on; it seems that different broods have different “tastes”. Some broods do not cope well with the plants we offer them in captivity (especially breeders in Europe and America breeding them outside of their native habitat) while others seem to be nearly immortal and thriving on oak, robinia or willow. Once they make it past the first few instars, where one may experience unexpected losses, the bigger caterpillars seem to be very strong in captivity.

The larvae are very lazy pupators, while some will spin objects such as leaves together to form some sort of protective cocoon, it is rarely more than a few threads of silk only. Some larvae will not bother at all and lie on the floor randomly and pupate there; naked and out in the open.

This is one of the most beautiful silkmoths I have seen in my life and I wish everybody who managed to obtain them good luck!

The females of this species also have a brightly coloured orange abdomen with black stripes, and the underside of their wings is orange. Pupae are dark to wine red and gradually darken and become blackish prior to emergence.

The female of Hyperchiria incisa

Thank you for visiting my website! Are you perhaps..