Holocerina angulata, the “Angulate batwing”, is one of the many species of Holocerina that are found in Africa; in total there are about 20 described species of Holocerina.  Holocerina moths are found in the African tropics, and can be quite common in some localities. Most of them are quite small – for Saturniidae standards – and despite being numerous and common, their biology is often overlooked. Holocerina angulata is one such species. According to my sources, Holocerina angulata is found in  Angola, Burkina Faso, Cameroon, Central African Republic, Congo, DRCongo, Egypt, Equatorial Guinea, Ethiopia, Gabon, Gambia, Ghana, Ivory Coast, Kenya, Malawi, Mozambique, Niger, Nigeria, Rwanda, Senegal, Sierra leone, South Africa, Sudan, Zambia and Zimbabwe and thus, is quite widespread.

Holocerina species can be very difficult to identify, and a lot of species look nearly identical. In this case, breeding them in captivity helps, for the caterpillars are often completely different looking and have diverse colour patterns. Despite some species looking the same as adults, their caterpillars look very different, making it easier to identify the species. 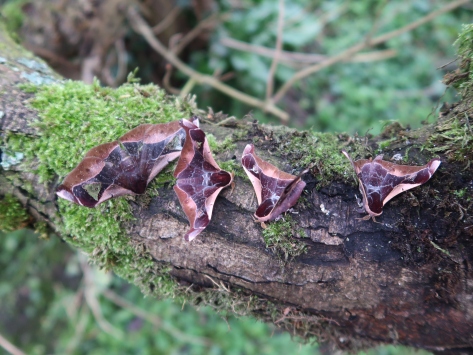 The caterpillars of most Holocerina species have three colour forms. The same is true of Holocerina angulata. In this case, the caterpillars have three distinct forms; a white and black striped form, an rusty orange/brown form with black/blue metallic setae, and finally a completely black form with yellow setae. Caterpillars are polyphagous and feed on many plant genera; reported have been Piliostigma, Psorospermum,  Ligustrum ovalifolium, Spathodea campanulata, Robinia pseudoacacia, Bauhinia reticulata, Albizia, Combretum, Ficus eriobotryoides, Ficus sur, Masa lanceolata, Sapium ellipticum. In reality, there are likely to be many more plants. Holocerina caterpillars tend to be very polyhagous and opportunistic, but there are not many people recording their food plants. Experimentation with Fabaceae (pea family) could be worthwhile.

Holocerina caterpillars have sharp spines, and are venomous. Touching the larvae roughly may inflict a painful sting that lasts several minutes, but it doesn’t seem to leave any long lasting effects except for some local swelling and soreness. Despite that, rearing them with gloves is a recommendation if you are someone that does not appreciate physical pain.  Holocerina are fast breeding moths, that often have continuous generations. In Africa, they seem to produce between 2 to 5 generations per year depending on the local microclimate; the main thing that slows them down is drought, and in wet tropical forests they will be continuously brooded, although flight of the adults may decline in regions strongly affected by dry spells. In captivity, Holocerina are easy to breed; some breeders have succeeded with Robinia, Ligustrum, Prunus, Pinus an other plants.  There are likely many more food plants that have not been found yet. The adults are very short lived (4 to 14 days); the very small males especially have a short lifespan. Despite being easy to breed and common, it can be hard to obtain livestock. They are often overlooked by hobbyists in favour of bigger and more colourful insects.

The caterpillars of Holocerina angulata have five instars. The first instar is black with an orange ‘saddle’. The second instar is black/grey with yellow spines. Sadly, I forgot to photograph the second instar; so L2 is missing from my page (stupid me!) – but L1,L3,L4,L5, pupae and adults are all pictured. The first instar takes about 4 to 6 days to complete; and in 6 to 7 days the caterpillars shed to L3. The young babies can be raised in plastic boxes quite easily without much effort. 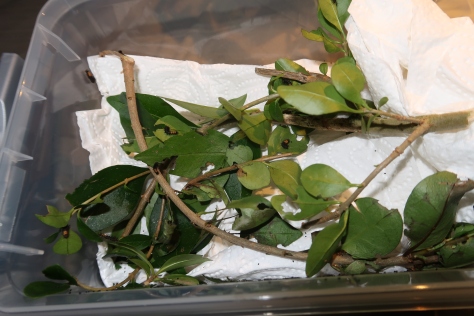 The first instars of Holocerina angulata more or less look the same. But what is really interesting is that the later stages are trimorphic; there are three distinct colour forms. One is the a creamy white form with thick black stripes and orange spines. Another one is a completely black form with yellow spines and yellow tubercules, and finally, there is also a rusty brown/orange form with black tubercules in spines. All caterpillars in L3/L4/L5 assume one of these three forms.

Trimorphism is normal for most Holocerina species; and all the species I have bred in captivity so far showed three colour variants just like Holocerina angulata. 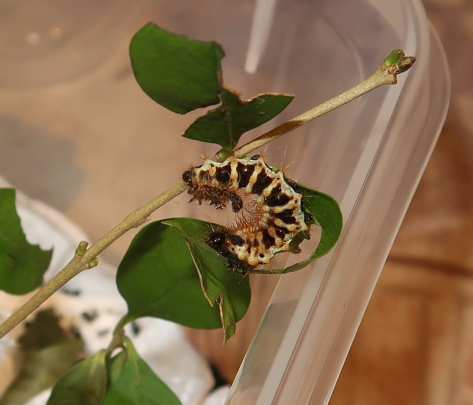 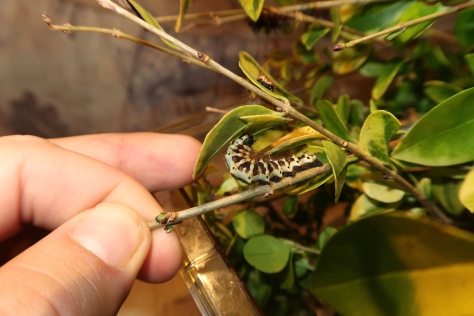 The later life stages of Holocerina angulata can be raised in well ventilated plastic boxes (fauna boxes); or even cages. In captivity they are quite hardy, but they seem to prefer ventilated and dry environments over excess moisture. On room temperature, it’s possible to raise them from egg to cocoons in about 1.5 month time.

Stinging larvae
Touching the caterpillars of Holocerina may cause a sharp stingings sensation. The caterpillars are armed with very tines spines on their backs, that can inject an urticating agent if touched. This doesn’t seem to have any long lasting health effects, but may be bothersome when taking care of the larvae; the sting is somewhat painful. Using gloves can be recommended for breeding these as a safety precaution. 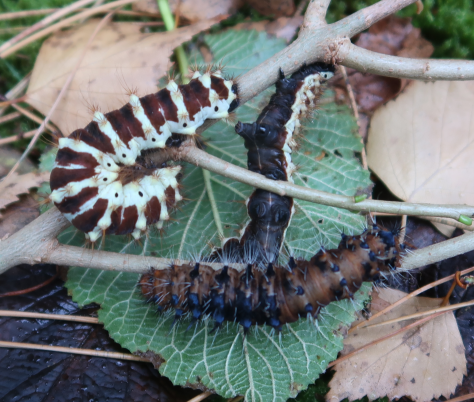 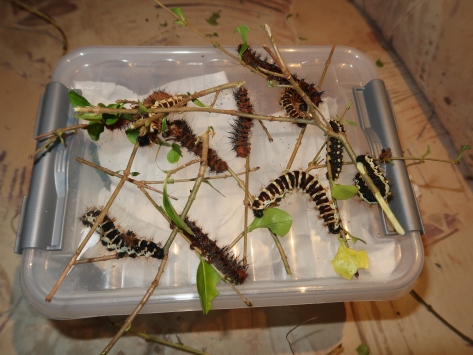 When fully grown, caterpillars spin very loose cocoons between leaves. Here the pupae cling to the host plant somewhat loosely; while some pupae are covered up between the leaves perfectly, other individuals don’t seem to care and spin cocoons that are exposed to the environment on the floor or against branches.  Some will also attempt to crawl under objects on the floor to spin cocoons (in the wild this would be leaf litter). 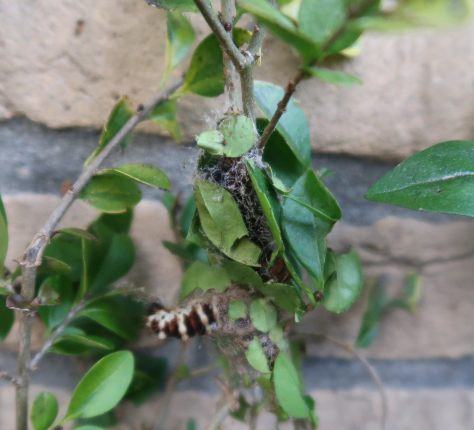 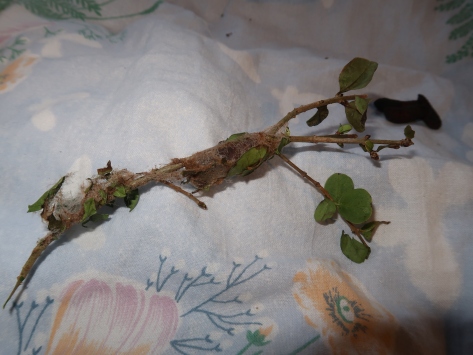 After a while, the caterpillars pupae and form rusty brown pupae. The pupae seem to be slightly covered with some type of powder, that may perhaps, make them more hydrophobic, or either acts as a dry lubricant that helps them escape their cocoons. Who knows? 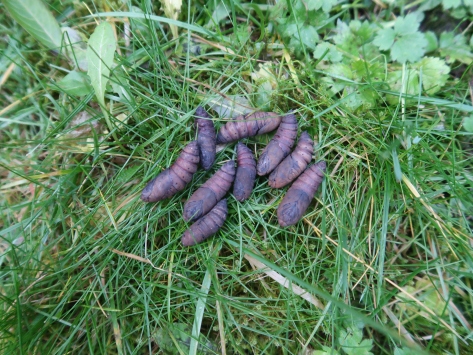 Adults seem to hatch quite fast; after pupating, it took 3 to 5 weeks for all adults to hatch. It seems that a small body size comes with a fast development rate.

Holocerina angulata females are medium sized (about 70-95mm) moths; but in comparison the males are very small (45mm-65mm). Males are very slender, with curved wingtips and small bodies. The wings of both sexes are very angular and seem to have a very complex pattern, that makes them blend in excellently with their surroundings. This Saturniidae has superior camouflage, and in the right type of leaf litter, it is very difficult to tell the insects apart from the background. Females have four transparent windows in their wings. In the males, these windows are also present, but strongly reduced, and more narrow and slit-like. 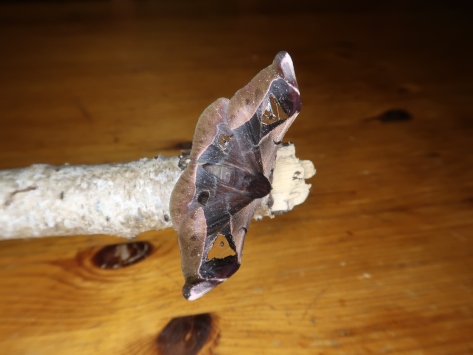 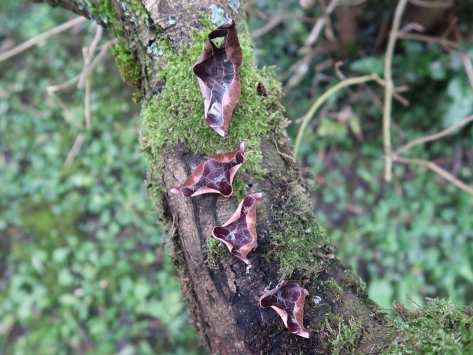 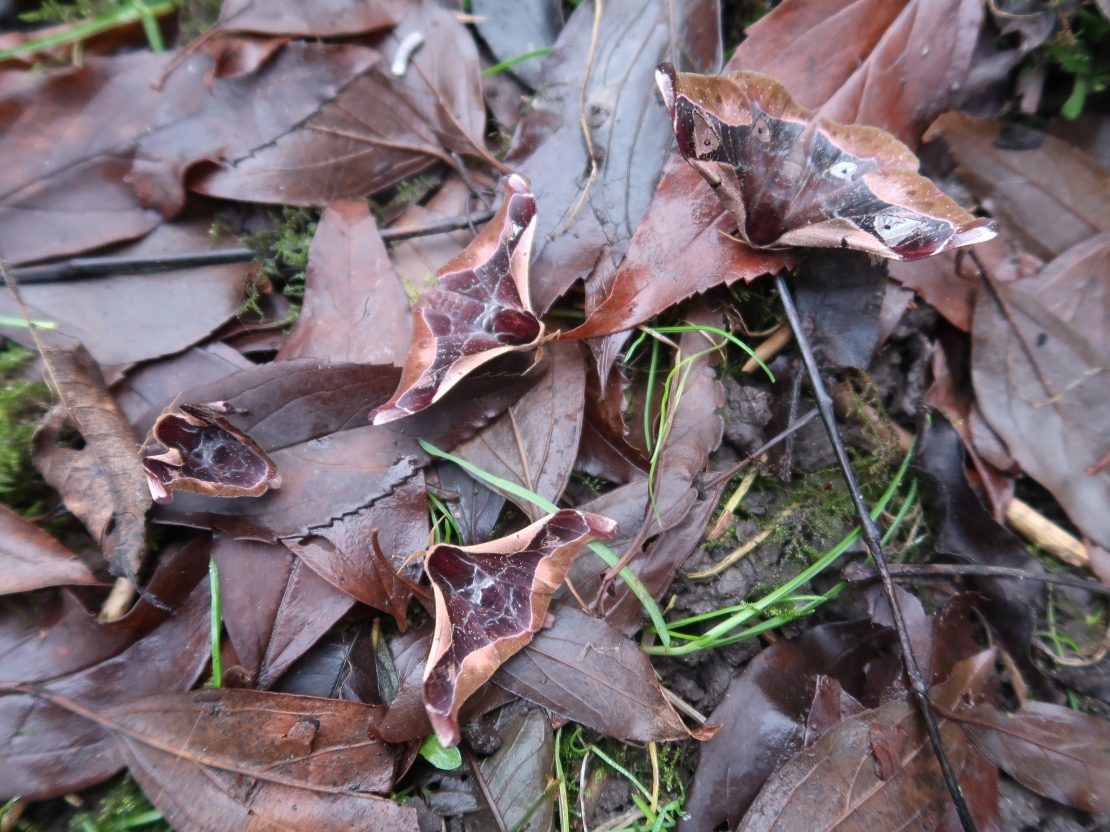 Pairing
Raising Holocerina seems easy, but pairing is not. Out of 4 pairs, I only managed to pair one couple. Eventually 3 males and 3 females died as virgins, despite having a partner. Why? I raised this species in winter, and I suspect they don’t like how cold my house is at night when the heating is off. They need extra warmth to do some action; it is logical since this is a species from tropical Africa that is used to warm/hot nights. I would say 22C+ is recommended. The good news is that this problem can be solved rather simply with some heating.

The second problem is more annoying. Holocerina can be difficult to pair because of the males. The males are very small and hyperactive. They have a lifespan of 3 to 5 days, but in cages, the will break their legs off and erode their wings away in two to three days. This leaves a breeder a very small timeframe to pair them. Females live longer (5 to 9 days). 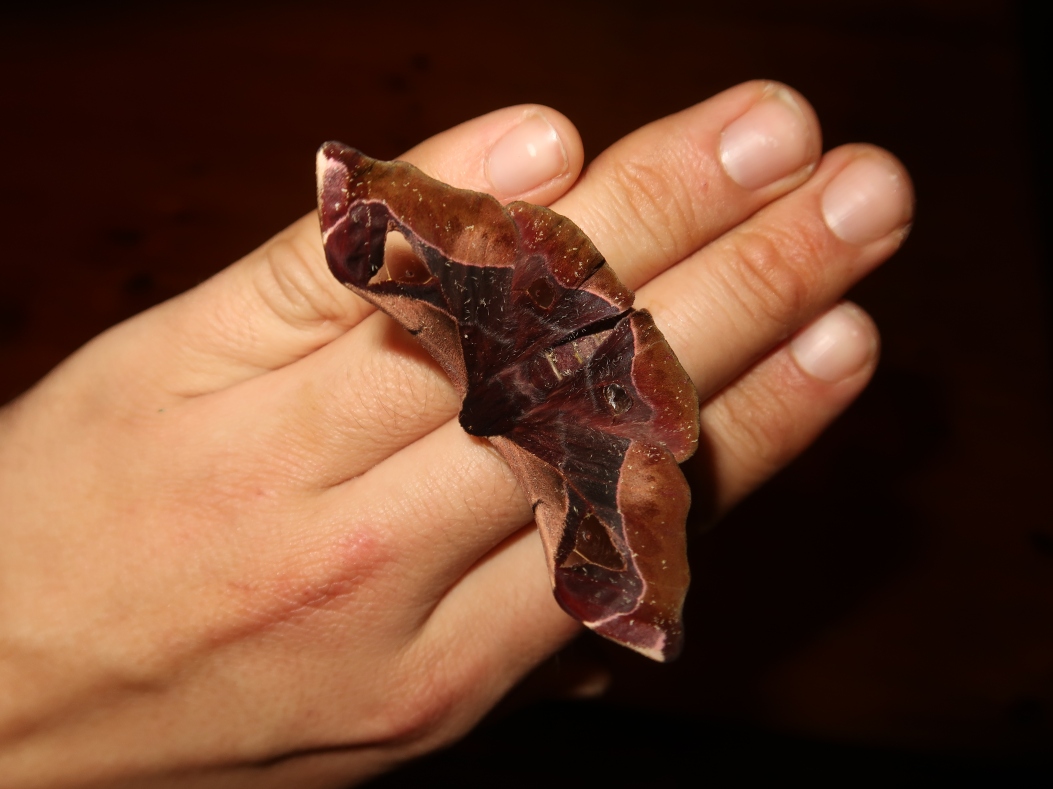 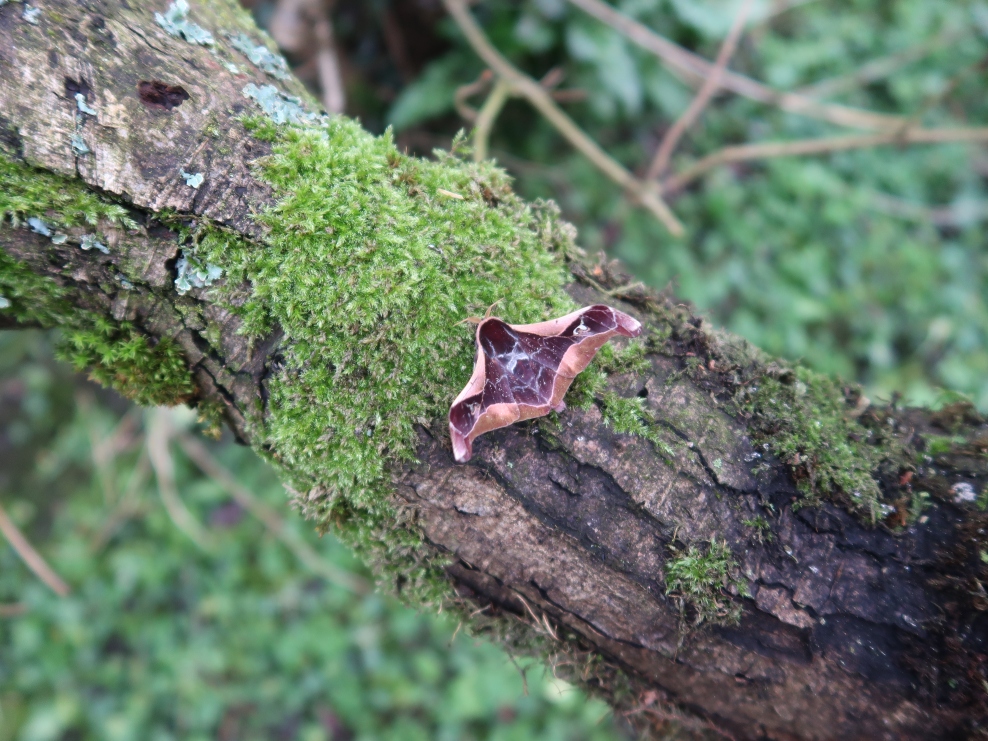 Gynandromorphism
How rare are gynandromorphs? Conservative estimates say 1 in 10.000; more liberal estimates say around 1 in 50.000. One thing is clear: it is very rare. I have bred hundreds of species of moths and have handled thousands of individuals, but I have only produced a handful of gynandromorphs during over a decade of extensive breeding and working with butterflies & moths in captivity non-stop. It rarely ever happens. Some Lepidopterists with bad luck will never see one in their lifetime. However, I was lucky enough to produce a gynandromorph after rearing Holocerina angulata! The left half of this specimen showed female traits, and the right side showed male traits. How does this even happen?  Females are heterogametic ZW, maleness can be determined by a single Z (ZW-sex determination system) chromosome. So loss of the W chromosome in one daughter cell at the first cleavage event will give one half female and one half male individual. This is the opposite of humans where males are heterozygous (XY) and females homozygous (XX). Fun fact: that means that originally, Lepidoptera gynandromorphs were always originally female, before the mutation happens.

It is much like winning the lottery. Personally, I don’t believe natural curiosities should be expressed in monetary value – but it is not uncommon for gynandromorphs to sell for 100$ to 1000$+ depending on what species they are (the more populair the species the more valuable gynandromorphs aswell). Collectors value these specimens highly, but their unusual genetics can also have scientific value.

It is interesting to note that my specimen is not a complete bilateral gynandromorph; the antennae and body were fully female, although the right side of the body expresses male traits. 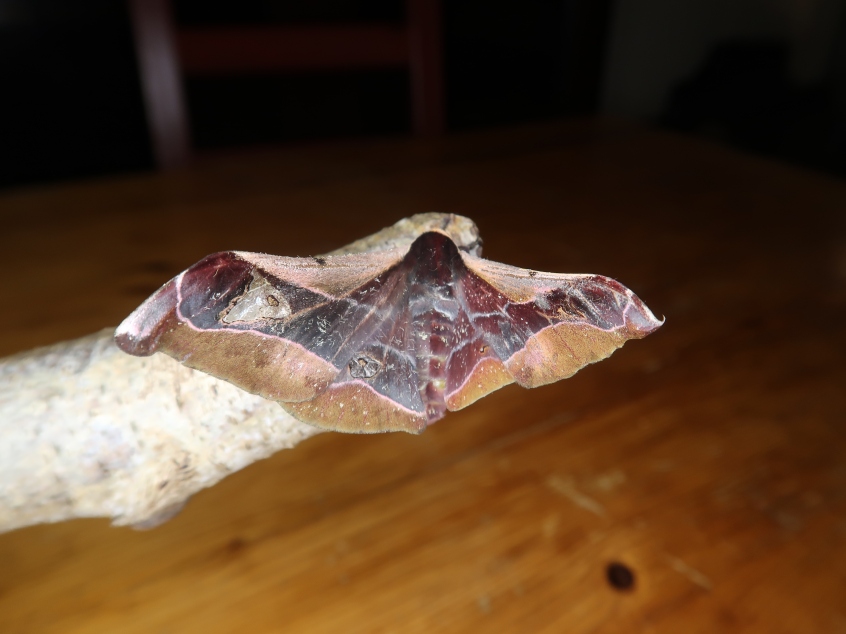 Unedited version of the gynandromorph