Not much is known about the Saturniidae moth Dirphia brevifurca. It is found in Peru, Ecuador and Bolivia where it feeds on a broad range of plants – the caterpillars are polyphagous. Males have bright orange hindwings, a whiteish border around their forewings and two white ‘hieroglyphic’ markings. Females are larger, more dark and have reduced white scaling, but are shown to have the same type of markings. 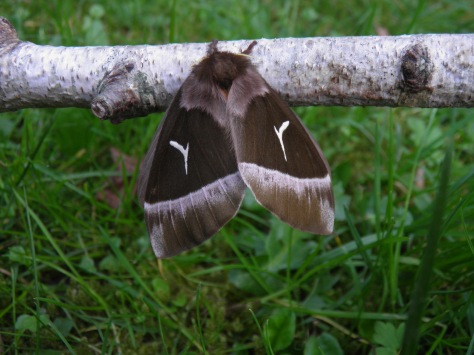 By chance, I have only raised females of this species. Pictures of males are missing in this article. However, it was such an interesting rearing and I could not leave it out. Identifying this species could be difficult, due to other similar looking species. The caterpillars are green with bright red spines that have a very mild urticating effect and they are gregarious during their early life life stages. The pupae of Dirphia brevifurca are creamy yellow, and the moths do not appear to diapause in captivity. Caterpillars develop from egg to pupae in about 1.5 to 3 months time depending on temperature and individual growth speed.  In captivity they accept Prunus (cherry), Pinus (pine), Rubus (bramble), and Quercus (oak) among other things. It is unknown to me what they feed on on the wild, but it can be assumed they will accept plants from the same families of plants that they accept in captivity, such as Rosaceae and Fagaceae.

Note: By chance, I have only raised females of this species. Pictures of males are missing in this article. However, it was such an interesting rearing and I could not leave it out.

The young instars of Dirphia brevifurca are brown, with orange head capsules. During the earliest stages of their life, they are gregarious: they feed, travel and shed skins together. They accept a broad diversity of host plants, upon which they are mainly found feeding from the underside of the leaves in small groups. The youngest life stages can easily be raised in plastic containers; this species seems to tolerate a lack of ventilation and excessive humidity very well. 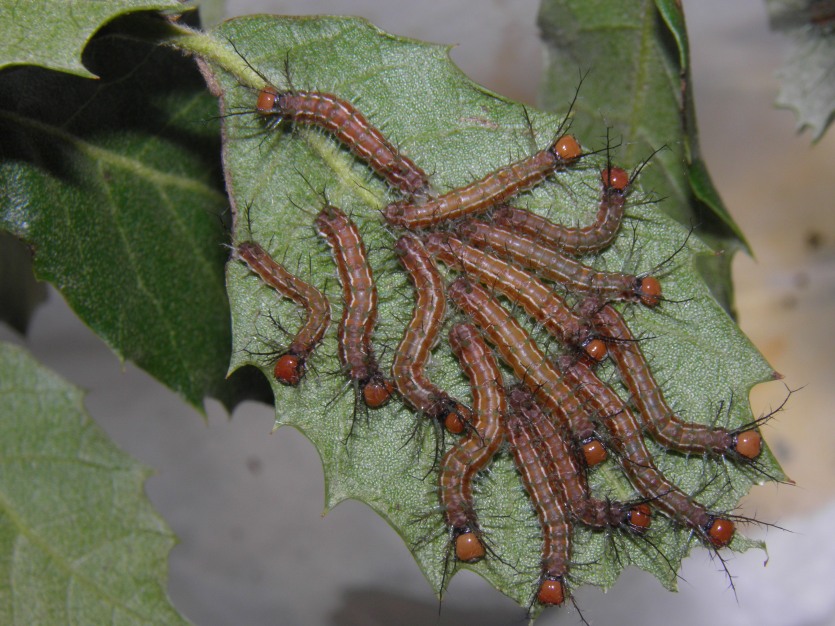 This Dirphia species has six instars.While the first four are rather brown, the fifth and six instar are light green with bright red spines and a white stripe running along the side of their bodies. 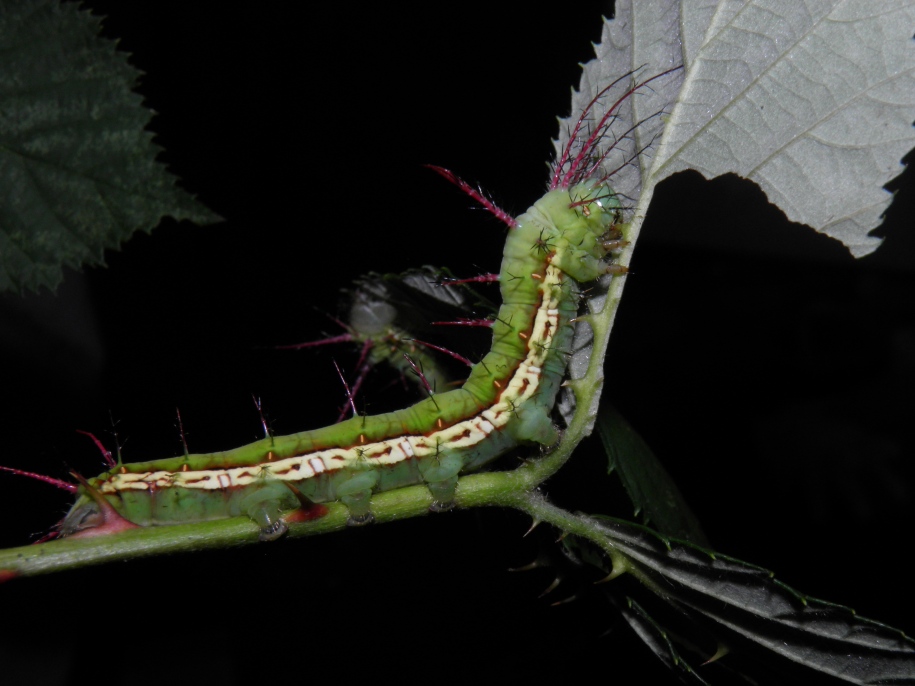 Before the caterpillars pupate, they lose their bright green colour, their colour fades slightly and they become more green/yellowish and ’round’. The caterpillars of Dirphia brevifurca seem to be fully grown in 1.5 to 2 months time, depending on the individual growth speed- some individuals appear to ‘lag’ behind and pupate much later than their brothers and sisters. 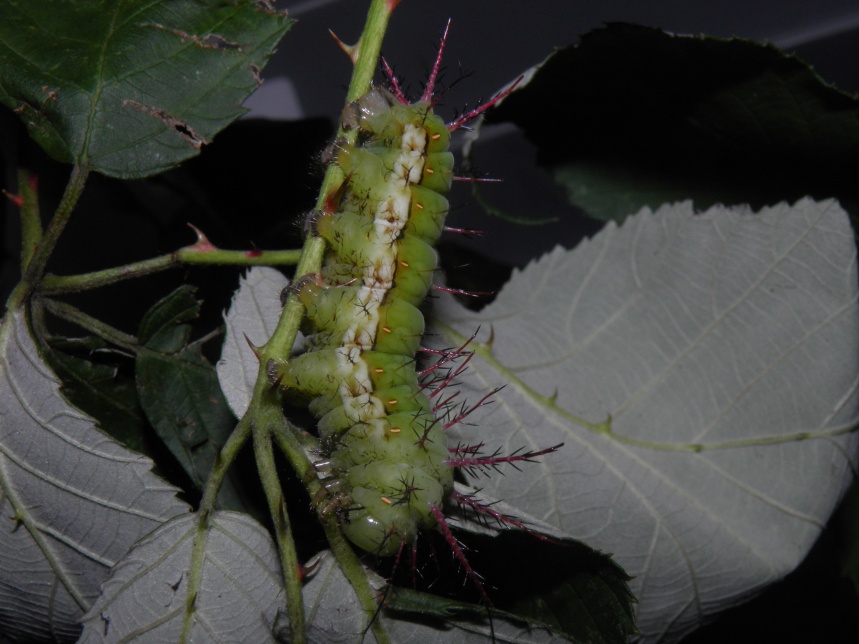 Once ready to pupate, the caterpillars of Dirphia brevifurca spin a very lazy, loose cocoon between leaves, composed of a minimum amount of silk (a few strings) which is just enough to stick some leaves together and form a cavity to pupate in.

The cocoon of Dirphia brevifurca, if you can call it a cocoon

Interestingly, the pupa of Dirphia brevifurca is pale and creamy yellow/white (a colour not commonly seen in Saturniidae pupae) with well defined segments outlined by a black line. Pupae are best stored humid but not wet, and probably benefit from being misted with water once in a while.

In captivity Dirphia brevifurca seems continuously brooded, with moths hatching from their pupae between 2 and 6 months time. The females are dark and large with two pale white “Y” shaped markings.  The males (not pictured) are smaller with paler white wings. When disturbed, the females will curl up their abdomen and pretend to be dead for a while, before becoming active again. This can make it difficult to place the moths on a desired surface, since it will retract the legs and refuse to climb. 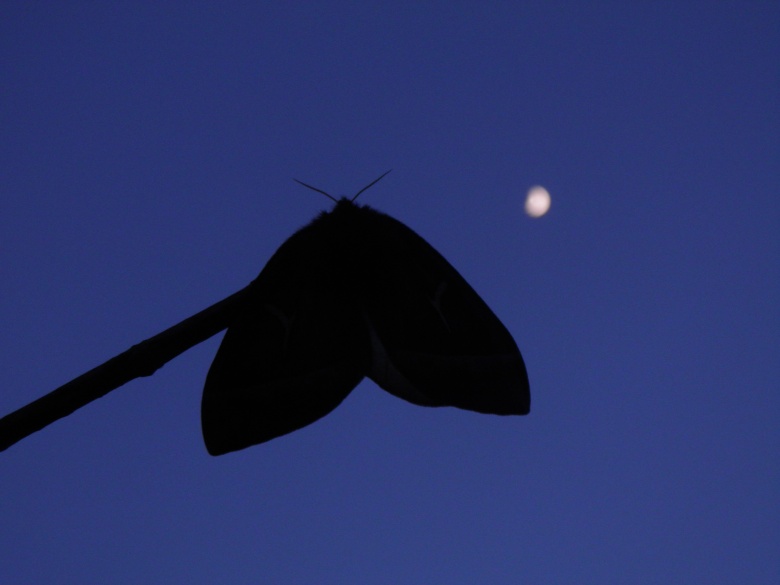 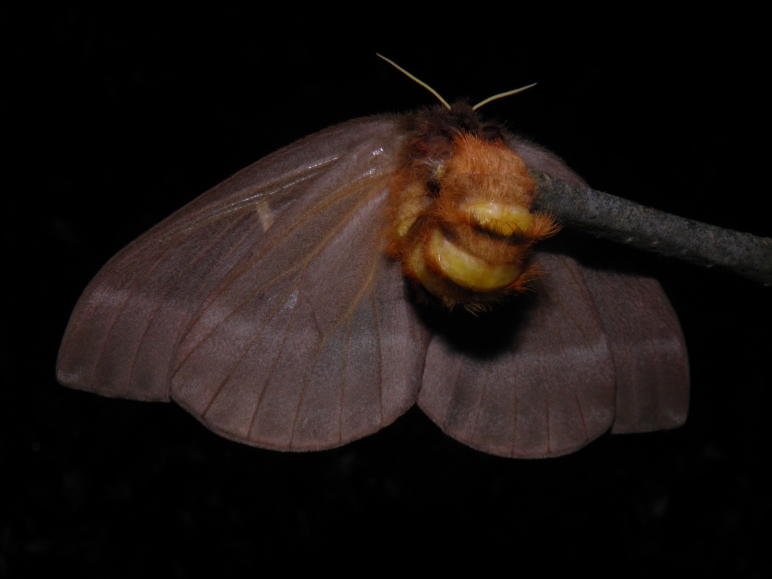