The goat moth (Cossus cossus) is one of the most common and widespread species of Cossidae in Europe. However, they are also founds in parts of Asia, Russia and Africa.  The larvae of this moth do not feed on the leaves of the host plant – instead they bore tunnels though the wood, and live internally inside their host trees. Because of this habit, they are considered a harmful species; most caterpillars defoliate plants by consuming all their leaves. While definitely not beneficial for the health of the host plant, most plants and trees are able to recover from being defoliated. Burrowing directly through the trunks of trees is another story however, and is generally not the type of damage that trees can recover from. Because of this, a few larvae have the potential to kill even larger trees. And because their host plants include trees of economic value such as apple, cherry, walnut or olive, most farmers do not consider them welcome guests.

Females lay their eggs in crevices in the bark of trees – they are also attracted to the tree sap of damaged and bleeding trees, and will prefer to deposit their eggs in the wounds of damaged trees. While this species mainly targets oaks and willows (Quercus, Salix) they will also take many more. They have been recorded on several Rosaceae such as pears, apple, plums, cherries, quince, apricot (Prunus, Pyrus, Malus) and   walnut (Juglans), persimmon (Diospyros), European olives, wild olives (Olea oleaster), mulberries (Morus), sea-buckthorn (Hippophae), and also poplar (Populus), alder (Alnus), ash-tree (Fraxinus), birches (Betula), beech (Fagus), maple (Acer), elm (Ulmus suberosa).

While they also target healthy trees, Cossus cossus prefers to attack sick or damaged trees, for these may be easier to penetrate to the young larvae. The caterpillars of the goat moth have a very long development time – the growth from egg to pupal stage takes 2 to 3 years in the wild. However in captivity, it is possible to raise the moth from egg to adult in 6 to 12 months time. Females may lay 200 to 700 eggs.

Cossus cossus, also known as the goat moth is a large species of carpenter moth found in Europe. The females are attracted to the smell of tree sap (and are sometimes found on moth bait) – despite not being able to feed and having reduced mouthparts. The reason is because they seek out wounded or damaged trees, and sap is an indicator of damage. They will lay eggs in the cracks or damaged bark of trees – it is said that one female can lay over 500 eggs. When the larvae hatch, they infiltrate the tree by boring into the wood, and live their live gnawing tunnels through the tree, feeding on the wood. Here the larvae can spend 2 to 3 years; due to the hard to digest nature of wood, which consists of a lot of cellulose, the caterpillars need to feed for a long time. However in captivity this can be reduced to 6 – 10 months. In captivity, the caterpillars will eat fruits, vegetables and bread too.

The reason that rearing them in captivity takes less time than in the wild is because in the wild, larvae mainly feed on the wood of trees. However bread and fruits such as apples and banana have a much higher nutritional value than wood (which consists of a lot of cellulose), and as a result, larvae grow faster in captivity since they have a more nutritional diet. As the larvae of Cossus cossus like the burrow, they are best reared in any kind of substrate; preferably one they can feed on. Wood chippings/shavings are ideal for this, and they would probably perform well in sawdust too. But this won’t be able to fully sustain the larvae. Besides substrate, they require food; the very polyphagous larvae seem to like all starchy foods such as (brown) bread, potatoes, beets – and they seem to like fruit a lot. The larvae avoid the acidic fruits however, so  Citrus or other fruits with a low PH are not recommended. The kind of fruit the larvae were most eager to eat include: Kiwi, Apple, Banana – especially banana seemed to be a great succes. The burrowing larvae will even come to the surface of the substrate to feed. They will also burrow or submerge themselves in the food items.

Cossus cossus do not seem to care about fungus or mold, amazingly. Even if neglected they will feed on rotting moldy bread or apples, without the slightest care in the world. Which is good news, even though neglecting them is not a good idea – in this kind of setup mold will be hard to avoid, and could be a health risk for the larvae, but such is not the case at all. The larvae of  Cossus cossus can bite and spit stomach acid if startled. They can also scale walls and even glass or plastic containers very well by spinning a silk road.  Beware if you are using an open container; they WILL escape! After rearing them for a long, long time (for a Lepidopterist that is, beetle breeders may be more familiar with such life cycles) the larvae will spin silk cocoons together and embed some wood/junk in their cocoons.  After pupating they will from wine red/yellowish pupae that will hatch in about a month. The caterpillars of Cossus cossus produce a foul, acidic vinegar like odor in captivity. 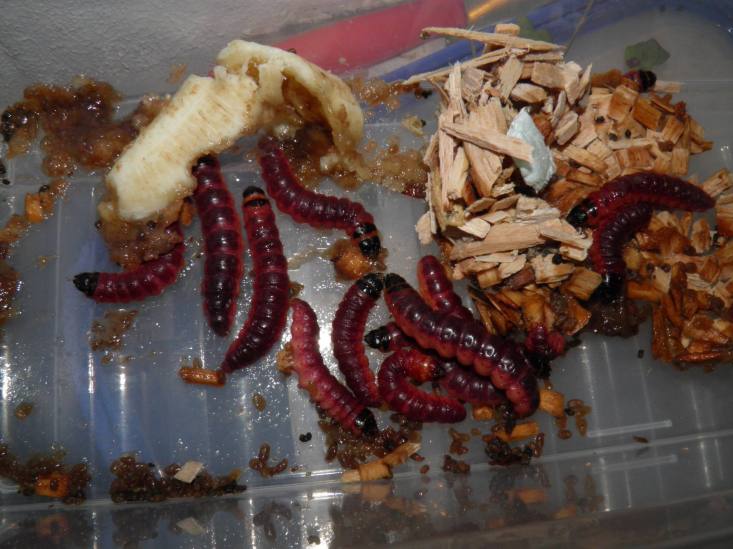 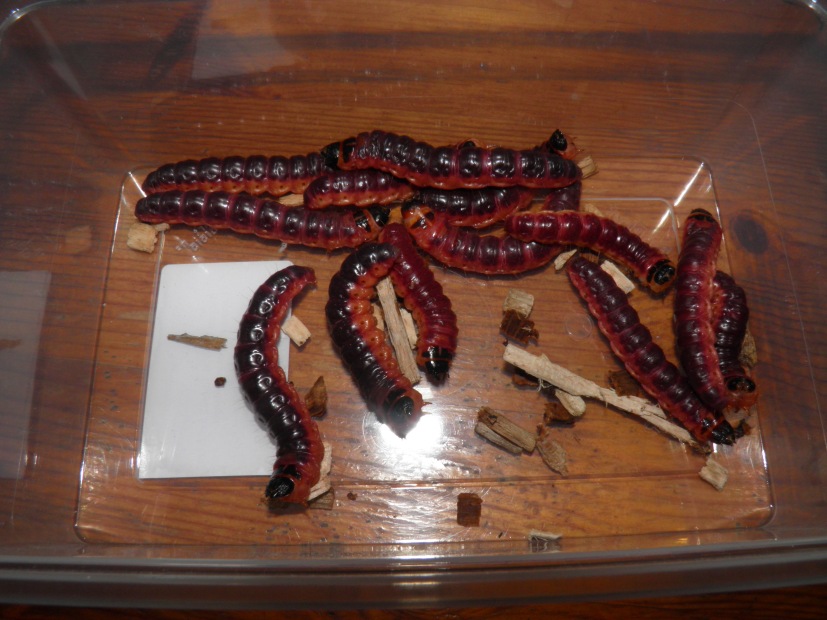 The pupae of Cossus cossus

I have no experience pairing the adults, as they emerged quite sporadic due to the individual growth speed of the larvae. Pairing the adults however may prove difficult. Females are significantly larger than males. For various reasons, moths that have been raised in captivity are much smaller than the individuals found in the wild. If reared outside, the larvae can overwinter 1 or 2 times.